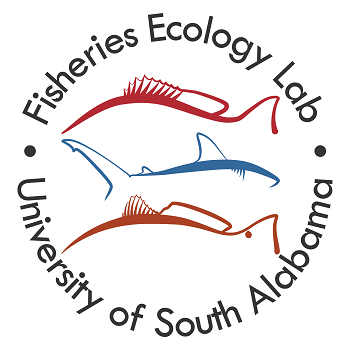 Two of the major problems impacting marine ecosystems are the overharvest of fisheries species and loss or degradation of marine biogenic habitats. According to current estimates, over 2/3 of the world's fisheries are fully or over-exploited, with only 3 percent of overfished stocks recovering. While poor management strategies and destructive harvest practices have contributed greatly to this decline, natural and anthropogenic changes in environmental conditions have also affected fisheries. Chief among these latter factors is the destruction and/or degradation of important habitats for fish, particularly juvenile stages, resulting from coastal development, declining water quality, and pollution as well as natural perturbations.

The fisheries ecology lab conducts research on a wide range of species from oysters to sharks and in a variety of locations from Alabama to Alaska. Research projects conducted by Dr. Sean Powers, Dr. Bob Shipp, and Dr. Marcus Drymon, their graduate students and research associates in this research group are designed to (1) quantify the relationship between fisheries species and marine habitats and (2) determine the community and ecosystem-level effects of overharvesting of marine fishes and shellfish. Because fishing pressure disproportionately targets higher trophic levels and larger individuals (i.e., fishermen want to catch the big fish) large, predatory species are particularly vulnerable to overharvest. These large predatory species can often exert a high degree of control on their prey populations (smaller fish and invertebrates) thus transmitting the effects of overharvesting throughout the food web and potentially affecting other economically important species (e.g., crabs, oysters, scallops). In the Fisheries lab, we perform experimentation and field surveys to detect and quantify the effects of changes in top-down control (predator to prey). From a marine resources management perspective, information on these types of effects as well as the response of fisheries species to habitat loss is critical for the effective conservation and restoration of marine finfish and shellfish populations.