Deacquisition of Birds-of-Paradise display in the Marx Library 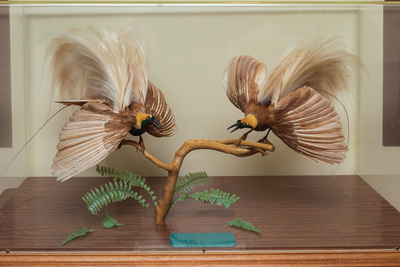 General Wilson (1906-1985), appointed as the 40th Chief of Engineers by President John F. Kennedy, served the Mobile Corps of Engineers' office twice during his distinguished career and chose to retire in Mobile in 1965. The Wilson family donated the birds-of-paradise to the University Library after his death in 1985.

In 2021, in an effort to continue to preserve the donated birds-of-paradise, they were transferred to Jason Strickland, Ph.D., Assistant Professor, Department of Biology, University of South Alabama to properly preserve the birds-of-paradise. Julie Andel, the photographer, took photos of the birds to archive.