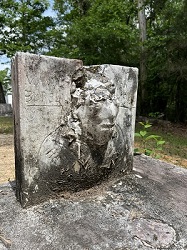 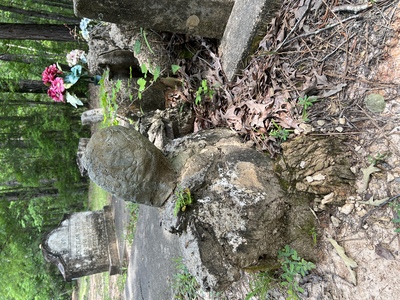 Ike Nettles created four death mask tombstones for people buried in Mt. Nebo Cemetery between 1933 and 1946. Three of the four death mask tombstones were of Ike's family members. This stone is of the sculptor's mother, Celina Nettles, and it was originally surmounted by a torso model to accompany her death mask. However, over time the statue has deteriorated and was toppled by Hurricane Frederic in 1979. This is a photo showing what is left of the torso. The woman's name may be spelled Celina appropriately if a later concrete slab marker at the base of the torso statue is correct. Perhaps added because of the damage done by the hurricane, this slab, with a hand-drawn cross and hand lettering, reads, "Celina Nettles, born in 1800s, Died January 1940." The marker is dated Jan. 22, 1983, in the lower right corner. Locals report that the statue also originally contained the deceased's hair, although it is no longer there.