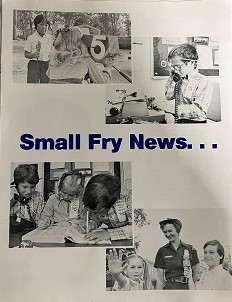 Small Fry News was a program developed by WKRG-TV in October 1977 to give kindergarten and elementary school-age children in the Mobile Gulf Coast area an opportunity to share timely topics, stories, and events of interest to other children their age. This program offered children an opportunity to personally gather information and report on these events rather than having adults do so for them. This allowed the children to use television as an instrument of instruction, news, and entertainment. Two anchor kids and four reporters from kindergarten through fifth grade were chosen by their schools, and each reporter told one story from a different location. The Small Fry News program aired three times during Saturday’s children’s daytime television programing in two-and-a-half minute segments.

Printing is not supported at the primary Gallery Thumbnail page. Please first navigate to a specific Image before printing.